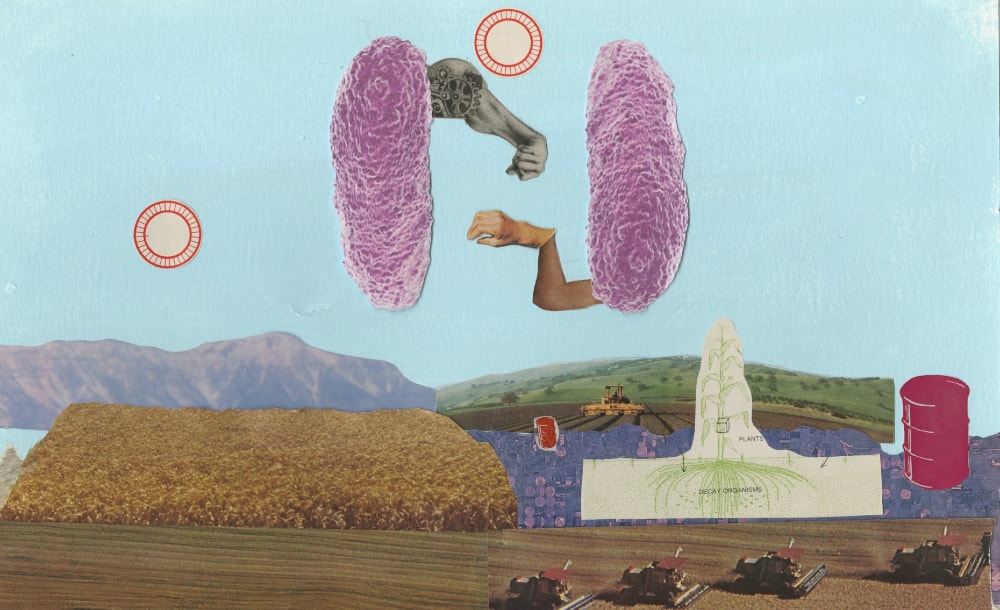 Metabolic Raceway, from Josh Archer and Chris Copeland, fellows at UB’s Coalesce BioArt program, is an investigation into the unique history of the first patented bacteria Pseudomonas Putida NRRL-B5473, and its importance to the fields of bioremediation and early genetic engineering.

P. Putida was engineered by Ananda Chakrabarty at General Electric in the 1970s to break down hydrocarbons more thoroughly in the case of an oil spill. After having his patent initially rejected, General Electric successfully appealed this decision before the Supreme Court, setting a new precedent for the ownership and control of life. P. Putida was engineered for power and speed, similar to the way automobiles are engineered and marketed to consumers.

The exhibition of Metabolic Raceway includes three DIY sculptural bioreactors made of car parts that will be breaking down motor oil over the course of several weeks. Kinetic elements of these bioreactors include, windshield wipers, crankshafts and steering wheels which perform the function of sustaining the bacterial metabolic activity. In these bioreactors are a selected polycultures of species of bacteria that have been sourced from post-industrial soil samples around the Buffalo, NY metropolitan area. The combined experience of these sculptural bioreactors will be a very slow exciting race not between cars, but between organisms.

This project is supported by Coalesce: Center for Biological Arts + Genome, Environment, and Microbiome Community of Excellence, University at Buffalo.

SHANE MEYER: Tell us a little about the genesis of your idea and how working with the biology department through UB’s Coalesce fellowship helped your initial idea evolve.

Chris Copeland and Josh Archer: We had just completed a project called Remediation Station that involved mycoremedation, which is the use of mushrooms to break down toxins in soil. So we were researching this topic and that was when we learned about oil degrading bacteria and the supreme court case Daimond v. Chakrabarty. We were both immediately drawn to how complex this story was, little did we know it would only get more complicated the more we researched it!

The automotive connection came about in a number of ways, the most obvious of which is the exciting idea that an organism like bacteria could destroy the fuel source of a car, be it oil or gasoline. That chemical connection brought about other types of ideas as well, because oil is so fundamentally tied to a certain part of American culture where oil and powerful cars are something to be proud of. We are both rather frustrated by the persistence of that attitude in a time when our energy sources and technological values need to be reconsidered. So through the automobile, bioremediation of oil becomes tied to the remediation of noxious car culture.

Working at Coalesce really opened up a lot of the science to us and showed us how much more there is to explore with these bacteria. We went in very interested in the one species that Chakrabarty modified, pseudomonas putida, and working in the lab with Solon Morse got us a lot more excited about the wild types and all the diversity of organisms that have these abilities. Also, experiencing the intense amount of labor that goes into good science really helped us understand how to frame that within our art. We aren’t about making absolute claims here. We are setting up an experiment that is based on a lot of research, but failure is always on the table. And that’s definitely part of it. We couldn’t have known that first hand without working at Coalesce.

SM: I think most people have heard the phrase “DNA-sequencing” but are ignorant of what might go into it. Can you explain, to the layperson, how you go from collecting field samples to bringing about the sort of end result you were able to bring about?

CC & JA: DNA sequencing, is a multi-step process of extracting DNA from living matter, amplifying a specific region of the DNA that is associated with a gene using PCR, purifying this amplified region of DNA, and then sending the sample out to a facility capable of performing Sanger sequencing. The result of this process is a long sequence of letters ATCG with metadata attached to each letter about the accuracy of the read. From this sequence scientists can compare their results with others collected all across the world by cross referencing an enormous online data bank. As we learned with the careful guidance of Coalesce’s ecologist and PCR master Solon Morse, the process almost always requires troubleshooting and numerous re-dos.

The goal for our project was to isolate oil degrading bacteria from Buffalo’s urban environment. We did this by first taking soil samples from across the city in areas that had varying levels of pollution from hydrocarbons. Then we started growing our soil samples on BAH agar plates with motor oil as the only source of food for the bacteria to digest—this weeds out all the competition. Months passed and eventually communities of slow growing bacteria began to emerge. We were optimistic that these bacteria indeed were capable of metabolising the motor oil on the plates, but in order to verify further that these bacteria were doing what we thought, we performed DNA sequencing on the strongest most distinct communities on all our plates. After a month of PCR work to amplify the bacterial 16S region we sent out our samples and were able to cross reference the DNA we collected in the database. Finally we had species names for each bacterial community we had isolated, we then cross referenced these in the literature on oil degrading bacteria to see if others had indeed isolated similar species. From this we discovered that seven of the bacteria we had isolated were indeed regulars in oil degrading communities.

SM: I’m surprised that many of your bacteria samples came from places one would not think were polluted—or sufficiently polluted to initiate the ecological process illustrated in your pieces; do you regard your work as a kind of consciousness-raising effort intended to demonstrate that pollution is “with us” as an inescapable fact of existence rather than contained in managed sites?

CC & JA: At the risk of sounding excited about a terrible issue like soil pollution, I think we were really pleased to find oil degraders in such seemingly innocuous sites like a highway overpass, or a raceway. Our results showed us that the type of slow pollution that happens at these places may be where the most interesting stuff is happening. We are definitely trying to open people up to these ideas, and to observe what is always around us more. It’s something I know we both think about a lot, for example, “What grows near the highway?” The earth is so porous and dynamic, I’m not sure that a totally “un-polluted” environment even exists. And by that I don’t mean something cynical like it’s all polluted, but it’s more a question of context. As in, polluted for who? Learning about how the bacteria survive in these toxic environments made us think about these questions.

SM: Have your ideas regarding the patenting of “life” been altered during the course of your project? For example, the sculptures, on one hand, seem to be critical of the carbon boosting ideology of car culture; on the other hand, they seem to demonstrate the efficacy of a technological solution to emission reduction—the idea that we can continue polluting so long as we find solutions for pulling the pollution back out from the atmosphere.

CC & JA: That is such a good question and I think that was the contradiction that peaked our interest throughout the project; it still does. We started learning about bioremediation with a lot of enthusiasm for a technology that is extremely important and exciting, it really is amazing what these bacteria can do. Though eventually, through research and talking with scientists involved in remediation, we came to a disheartening phase when we learned how the process has been commodified and misrepresented. As in, “Oh! Just throw some bacteria in there! That’ll fix our problem of spilling oil everywhere!” That type of technological fix for a technological problem is something we are trying to point out the absurdity in. Making bioreactors out of car parts has many different meanings to us, maybe first and foremost is being what can live in your car? But also how pop science and car culture are connected by a fetishism of technology, invention and power….

Working in the lab showed us how ubiquitous and diverse oil degrading organisms are. The idea of propagating a single strain that is not native to the environment is far fetched. In other words, the organisms already present in a polluted environment are most likely the best oil degraders you could ask for.

None of this is to discredit the research Ananda Chakrabarty did, but this whole story about General Electric and the patent was more suspicious to us. The way you phrased it in your question–it’s okay to pollute so long as we can clean it up–seems to be what G.E. was thinking at the time, but more importantly they were creating a patent and a product that they could profit off of. This court case laid the groundwork for the whole biotechnology industry, where patenting organisms is common practice now. But when it comes down to it, you have to just ask, who benefits from owning an organism? Or a seed? It’s a type of control that I am not fond of and causes all sorts of problems.

CC & JA: BioArt is definitely a field that provokes both curiosity and suspicion, suitably so in our experiences. It is far too easy as an artist to claim ownership of science and the validity that comes from a rigorous scientific process without having to support the claims you make with real evidence and peer reviews—the fundamentals of good reputable scientific research. Scientists who claim their work as art are equally suspect having not established their claims within the larger artistic community and art history. The problems we have encountered with BioArt always seem to stem from a lack of respect for either discipline.

Good BioArt has the ability to reach, educate and inspire twice as many people as each discipline on its alone. By mediating science, art has the power to reconcile the overwhelming scientific illiteracy in our culture. The goal of BioArt in our opinion is to mediate complex ethical issues via radical experimentation, make the experience of science fun and comprehensible for all, and to inspire others to pursue cross disciplinary ways of problem solving. This goal might be seen as disruptive to some, but only those who cannot see the value of radical learning experiences.

JOSH ARCHER is an artist and amateur scientist. His interests span across many disciplines. Issues concerning the environment and its health are his main focus. Through art and science Josh believes that we can heal ourselves and reverse the disastrous effects the we have brought upon so many environments and those living in them. Josh is also a huge proponent of collaboration in art and life.

CHRIS COPELAND is an artist currently living in Seattle, WA. With diverse media such as kinetic sculpture, living systems, and drawing, my artworks mediate conflicts I observe between organisms and technological progress. Many ecologies, systems, and forms of labor fascinate me, which is why my work might place you in an office, on a bicycle, or on a farm. By connecting these different systems, I show that nothing happens in isolation, especially not the current habits of mass production and mass consumption. I work with many different collaborators to make these artworks possible. These collaborators include bakers, biologists, bacteria, and more. I received my BFA from the Carnegie Mellon School of Art in 2018, and I have been an Artist in Residence at the Coalesce Center for Biological Art.