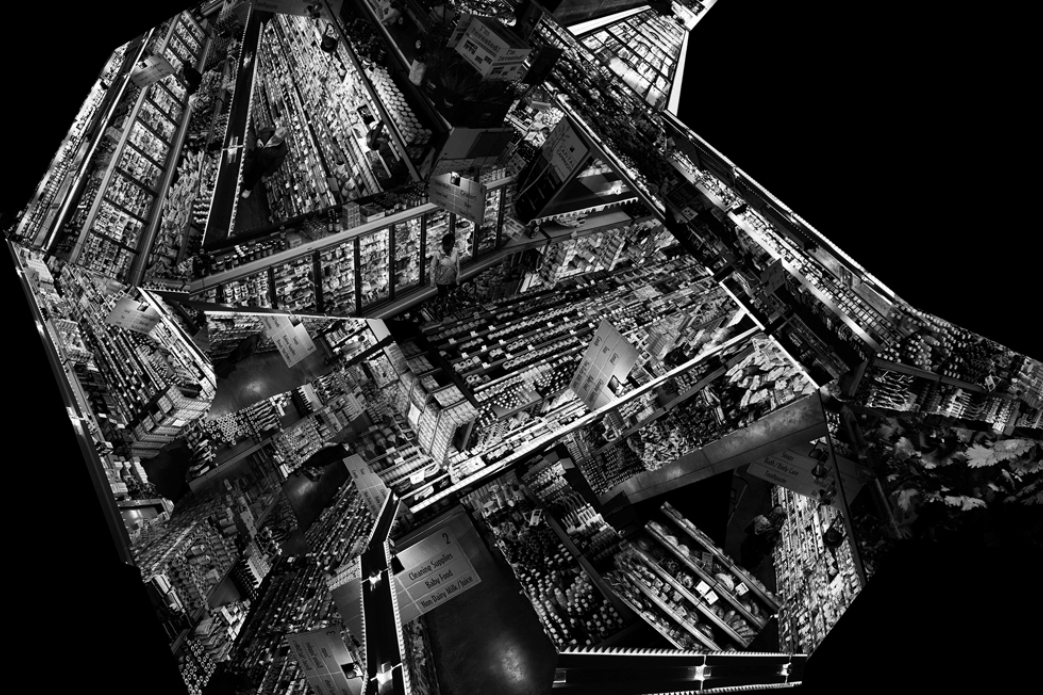 Wu is one of two artists awarded a solo exhibition by guest juror Rachel Adams as part of the 2016 CEPA Members’ Exhibition. An opening exhibition with the artist will take place on Friday, January 27, 2017 from 7p-10p.

“The photographer is an armed version of the solitary walker reconnoitering, stalking, cruising the urban inferno, the voyeuristic stroller who discovers the city as a landscape of voluptuous extremes. Adept of the joys of watching, connoisseur of empathy, the flâneur finds the world ‘picturesque.”
– Susan Sontag, On Photography

Objectify Space is an ongoing project that consists of nine B&W photographic montages, each digitally constructed from multiple photographs shot at a single location. In this project, Wu explores how the ambiance of public spaces subconsciously affects personal experience. Recognizing that there’s a transformative power to physical space that photography — as the representation of a witness of events — cannot fully render representationally, Wu began to selectively fragment his photographs and re-situate them within a new conceptual framework where the collective fragments serve as a symbolic representation that communicates a sense of searching via disorientation.

Inspired by street photographers such as Henri Cartier-Bresson and Susan Sontag, Wu explores each location, taking on the role of a modern day flâneur. As he strolled around with no sense of direction, Wu would wander around and photograph until he had a solid impression of the space where he was photographing. Later, he would strategically juxtapose select elements of chosen photographs to create one image that reflected his impressions of the location as directly witnessed while physically present. The pattern, light, and shapes within the physical space become the dominant elements of these brooch-like images.

The series title, Objectify Space, hints to this process of re-forming spatial experience into emblematic objects. Although the visual experience of a viewer standing at a distance from his photographs reveal only abstract objects, closer examination reveals a dislocated impression comprised of varying fragments from Wu’s real time interactions within a given space.

Born in Fujian, China, Lingxiang Wu is a photography-based visual artist living and working in New York City. He studied Photography and Film/ Video Production at SUNY – Buffalo where he received his BA in Media Studies and Studio Art. Wu creates experimental videos, abstract photographs, and photographic collages that are influenced by a diverse range of references from the modernist avant-garde.