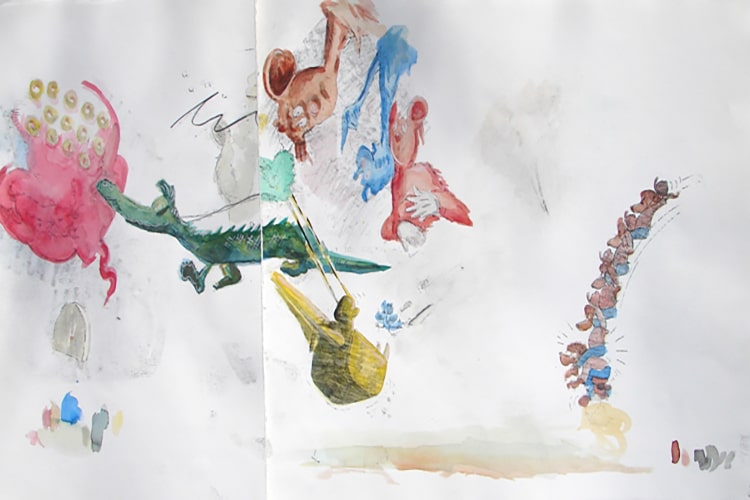 In Latin, ne plus ultra literally means ‘not further beyond’ and was the inscription on the Pillars of Hercules prohibiting passage by ships through the Strait of Gibraltar and into the unknown. The modern definition of ne plus ultra is “the most extreme example of its kind.” This exhibition represents the pinnacle of this period of Beam’s development, marking a remarkable and quantifiable point in his career. The noteworthy work from private collections will be amplified by a new body of works, culminating with the artist’s (self-proclaimed) opus Three Dog Night (2014). Following this exhibition, Beam will be taking a hiatus from art making to bring supplementary projects, which have been in the works for some time, to completion.

The opening for Ne Plus Ultra includes several thrilling elements, which will differentiate it from the everyday art reception. At 8:45 p.m. guests will be treated to a live performance introducing Beam and this esteemed collection. Following the performance, three of the works from the exhibit will be given away via raffle. Tickets for the raffle can be procured from CEPA Gallery and requested via email. Guests will also be treated to a champagne toast and the unveiling of a major work to be offered via silent auction during the course of the exhibit. You may request a raffle ticket by emailing info@cepagallery.org.

The silent auction item titled Accumulation of Materials Taken from Here to There, 2007-2013, is made up of appropriated objects and mixed media preserved in vacuum sealed bags and presented in a secured wood crate encasement. Measuring 27-1/2 x 39-1/2 x 6-1/2 inches this work is in part a time capsule of the art history of Western New York, and is sure to invoke nostalgia within the community. The accompanying publication for Accumulation of Materials Taken from Here to There, which details the contents, is also included within the crate (Edition number 1 and 2). The publication was printed in a limited edition of 10.