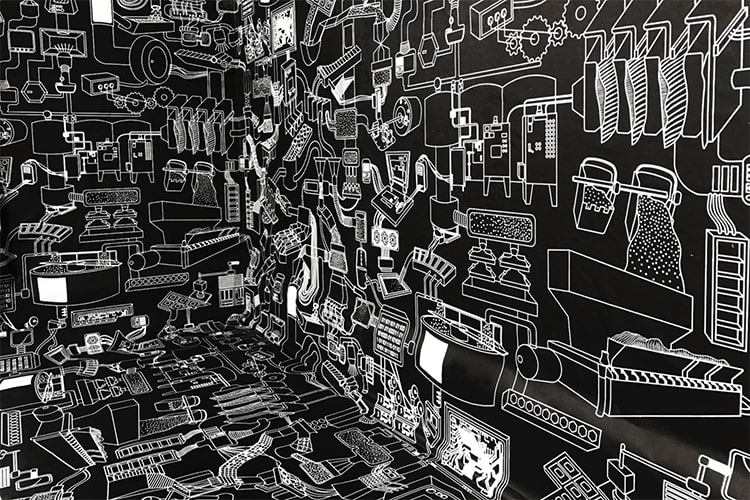 Created as a site-specific immersive print installation, featuring an interactive audio interface, Shin will wrap the third floor passageway in a custom hand-printed wallpaper. An opening reception with the artist will take place on Friday, April 21, 2017 from 7-10pm.

Mizin Shin’s work examines the interdependency of manufacturing and production systems by uncovering and visualizing networks and connections as an attempt to better understand the complicated phenomenon of economy, a system interdependent on a large and continually increasing number of other social entities. By revealing the intrinsic connections among simple objects, the work highlights the idea that all elements of our systems are of significance, from the individual items to the larger constructs. Though they can be imperceptible from afar, these relationships are easier to pinpoint among simple things in our everyday lives. For example, in the manufacturing process of cookies, how many steps and systems are involved? How is each constituent part, such as milk, butter, or the cookie, related to other manufactured goods like aluminum and iron?

For How Things Are Made, viewers will enter a sound-filled corridor wallpapered in hand-printed woodcuts that depict a range of manufacturing and production processes. The prints will cover every surface from the ceiling to the floor and the walls between. The viewer is challenged to find an origin or conclusion to the complex system within the surrounding prints. Interconnections are formed from every direction as the various patterns blend into each other. Though each element of the system may at first seem to exist in isolation, further investigation into the relationships of these intricate networks begin to more clearly reveal patterns of consequence in these webs of interconnectivity.

Viewers are invited to directly interact with the installation on a visual, tactile, and auditory level. Inside the wallpapered rooms there are interactive sound components consisting of electronically actuated cubes placed along specially designed surfaces. As the cubes are moved by the participant — thus creating new patterns — they begin to emote sounds. Each time a cube is moved, the relationship of the cubes to one another is altered. In turn, the sound evolves according to their physical relationship to each other. Viewers, who are now willing participants, collectively manipulate the synergy of the network, implicating the participant as an active part of the system.

Born and raised in South Korea, Mizin Shin graduated from Hong-ik University with a B.F.A in Printmaking, and is currently in the M.F.A program at University at Buffalo where she has been teaching intaglio, collagraph, and screen print courses. Shin has been showing her work regionally and nationally at institutions on both East and West coasts. She was recently awarded the 2017 Graduate Student Fellowship from the Southern Graphics Council International, where she represented University at Buffalo in Atlanta with a demonstration of a non-toxic intaglio technique. 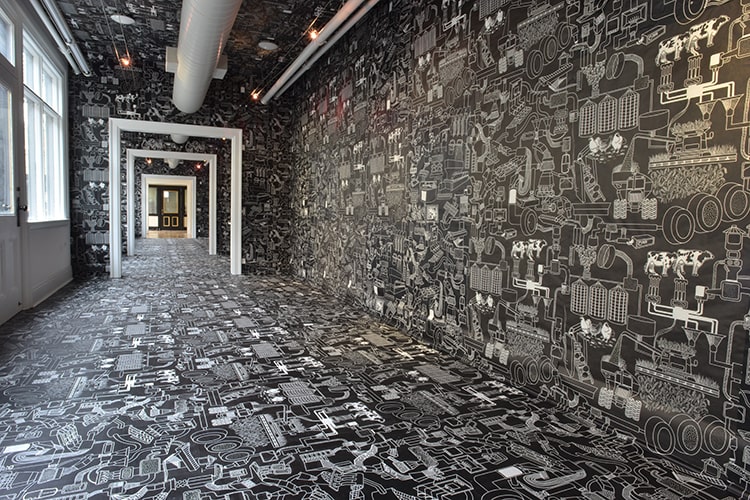 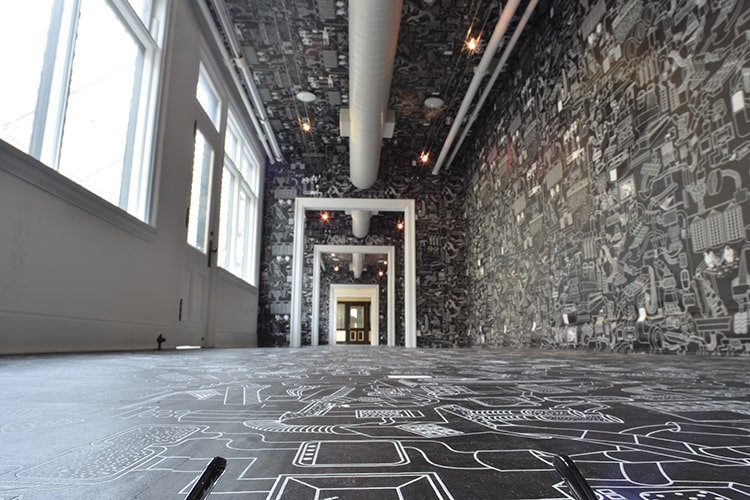