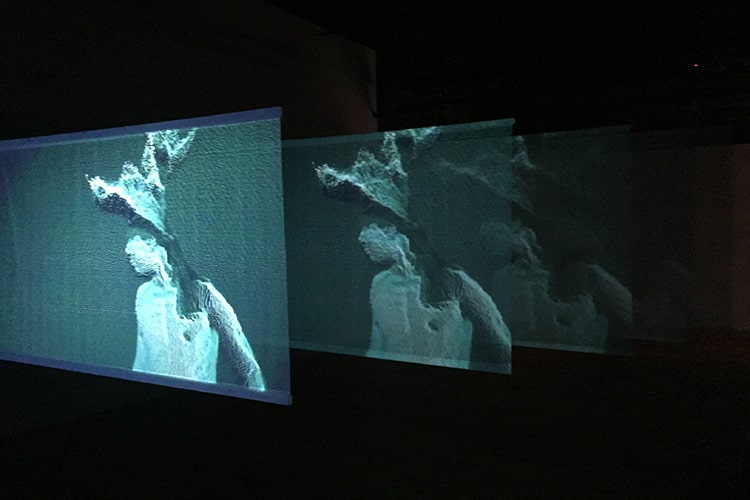 For his exhibition at Big Orbit Project Space, Sanchez has created a site specific video installation that reflects on notions of mythology and cultural identity. An opening reception with the artist will take place on Saturday, April 1, 2017 from 8-11pm.

Maso is a multi-channel video installation that investigates the realm between man and nature, real and imagined, sacred and profane. Sanchez’s explorations seek to decolonize aesthetics in relation to the ability of the moving image to transform and alter cultural identity. This immersive multi-media based installation presents the viewer with characters and mystical entities shaped by Latin American culture featuring characters and their activities, which toy with pre-scripted notions that are often perpetuated by films and television.

Sanchez creates a place where the real cross-pollinates with fantasy to form an amalgam suspended between fact and fiction. Through the clever manipulation of cultural stereotypes, Sanchez’s characters — sometimes played by the artist himself — begin to disrupt, contort, and subvert our understanding of the indigenous stock characters often found within cinema. They are at once exoticized caricatures of mythical proportions yet somehow believable. The viewer is forced into a precarious negotiation between perceptions shaped by mass media and the inherent authenticity of the artist.

Born near Mexico City, Mexico, Javier Sanchez is a multidisciplinary artist who currently lives and works in Buffalo NY. Sanchez studied Archeology in Mexico City at ENAH (Escuela Nacional de Antropologia e Historia) before moving to the San Francisco bay area. In 2009 he completed his Associates of Applied Science degree in Commercial Photography from CSN (College Of Southern Nevada). In 2012, he received his BFA in Studio Art from UNLV (University Of Nevada Las Vegas). His work has been featured in the San Francisco Bay Area publication ‘Art Practical’ and Hyperallergic, among others. He is currently an MFA candidate in the SUNY University at Buffalo’s Department of Art.