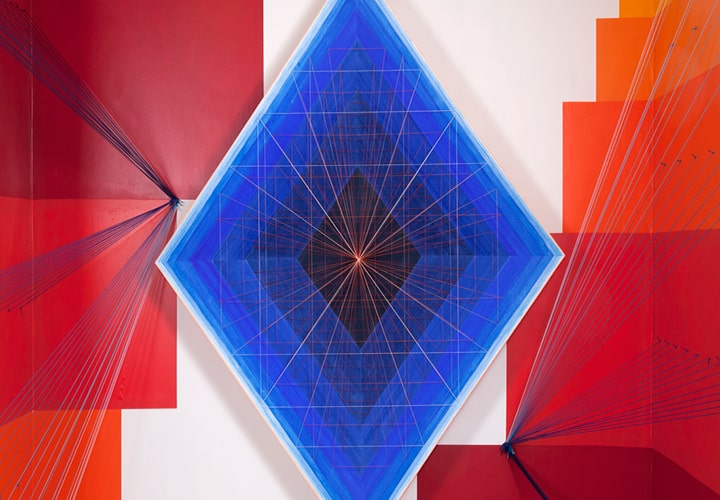 CEPA Gallery is pleased to be bringing Brooklyn-based artist Amber Heaton to Western New York for her first solo show in Buffalo. Heaton’s recent works have drawn upon natural phenomena—ocean waves, sunsets, the passage of time. She examines the world around her and considers her place within these vast systems. Then, using numbers and data, she translates her experiences into awe-inspiring, vibrantly colored installations. Her Buffalo exhibition, Evenly Even, will feature new site-specific works created especially for, and inspired by, the Big Orbit Gallery space. Heaton explains:

When I first saw images of Big Orbit Gallery, I was immediately drawn to its unusual shape, an elongated octagon. I started thinking a lot about octagons and the space inside an octagon both mathematically and symbolically. I began developing work based on that shape.

The spiritual meaning of the octagon in sacred geometry is renewal or rebirth. The works in this show are meditations on existing in a state of change, growth, and variation. This state is an intermediary, liminal space; a space in which I’m searching for a sense of balance or equilibrium that is elusive and impossible to achieve. Using the shape of the octagon as a beginning, I’m working through systems of pattern, colors, and numbers to explore a sense of balance, symmetry, and humility.

Amber Heaton’s work has been exhibited at The Bronx Museum of the Arts, Parrish Museum of Art, International Print Center New York, and other venues internationally. In 2016, Heaton participated in the AIM Program at the Bronx Museum of the Arts, and in 2017 she completed a residency at the Center for Book Arts in New York. Heaton received her MFA from the Rhode Island School of Design in 2012, and her BFA from the University of Utah in 2009. She was awarded a Fulbright Fellowship in South Korea from 2001 – 2003. Heaton lives and works in Brooklyn, NY.