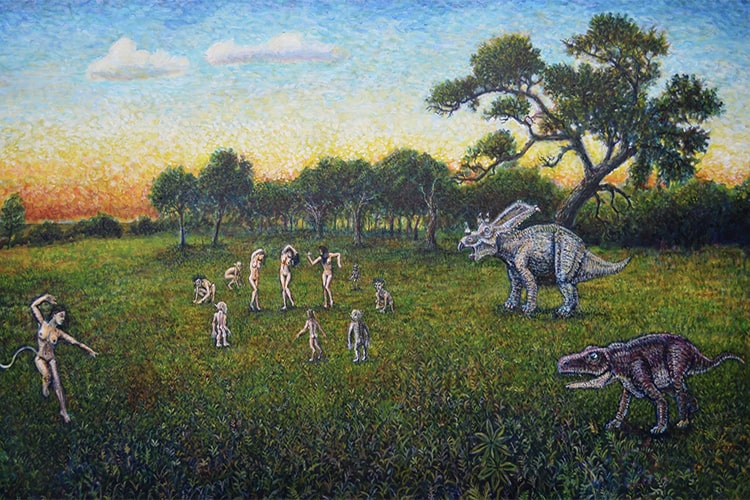 An opening reception with the artist will take place on Saturday May 20, 2017 from 7-10pm at Big Orbit Project Space.

Evinczik’s narrative paintings — influenced by the Hudson River School, Surrealism, and other prominent art historical movements — playfully combine prehistoric landscapes with western mythologies in a fashion that draws upon the long tradition of American folk art. These reimaginings, all of which take place in prehistoric times, reshape the epoch as one of mystery, magic, and mysticism.

As a child, Evinczik regularly rummaged the stacks of his childhood library for books about dinosaurs and other prehistoric life. This obsession eventually began to coalesce with other stories — Swedish folk stories about trolls, fairies, goblins, and mythical Huldra — from his grandmother and books from those selfsame library shelves. His grandmother believed in trolls but warned, “Good Christians didn’t talk about them.” Rather than speak about these fantastical creatures, Evinczik made the decision to paint them instead.

On the surface Evinczik’s paintings appear to be a revival of past traditions related to wildlife and landscape painting. Perhaps to some degree they are. However, closer consideration reveals an underlying theme of loss and nostalgia. Like the prehistoric animals that once roamed the earth, the folktales and lore that were once so engrained in our collective culture are also now becoming extinct, along with their wisdom. The act of painting serves as a reconciliation of sorts. Evinczik’s paintings are talismans — tools with which to conjure the wisdom of ghosts that roam the forests longing to tell their stories.

Born in the woodlands of Busti, New York, Evinczik received a BFA in painting from Fredonia State College. After a stint in a number of punk bands, he received his Masters in Art Education and has been working full time as an art teacher for Buffalo Public Schools since 1999. Having maintained an active art studio for the past 27 years, Evinczik has produced solo exhibitions regionally at Gallery 164 and Artspace Buffalo. His work has also been included in group shows at the Erie Art Museum, The NACC in Niagara Falls, Buffalo State College, Jamestown Community College, and the Albright Knox Art Gallery, and College Street/Queen City Art Gallery, in addition to Studio Hart, the Jamestown Prendergast Library, and McGee Gallery. 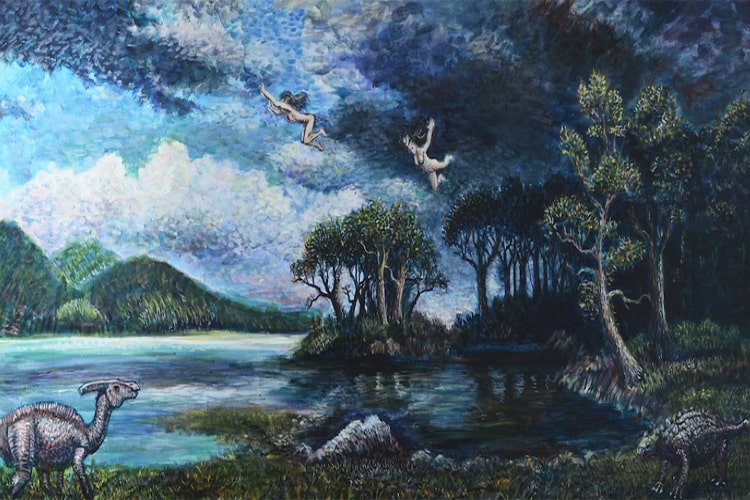