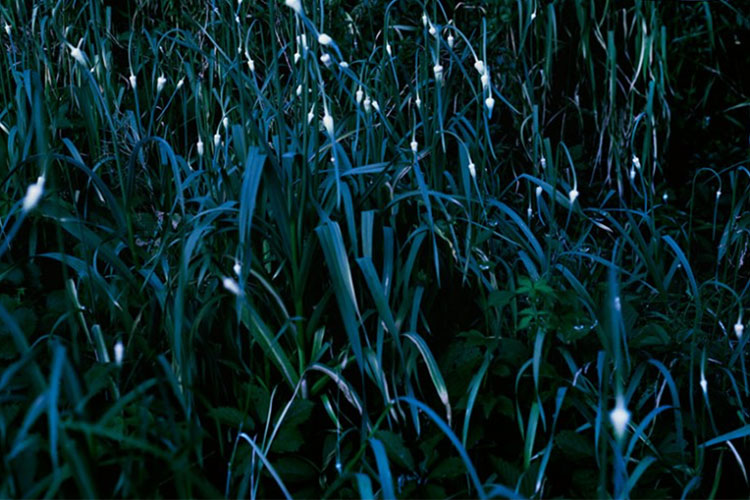 In conjunction with the their current exhibition at CEPA Gallery, Gregory Jones, founding editor of In the In-Between sat down with artists Gregory Halpern & Ahndraya Parlato to discuss their work.

Gregory Jones: East of the Sun, West of the Moon is a collaborative series between the both of you, and the photographs were all made on the Solstices and Equinoxes of 2012 and 2013. Can you talk about how the idea to collaborate came together, and what made each of you want to pursue this project?

Ahndraya Parlatto: The initial idea was mine. I was actually trying to think of a way that Gregory could shoot whatever he wanted, wherever he wanted, but still have some sort of loose cohesion. He was quick to point out that the nature of the project was actually well suited to my work, and so we decided to do it together. I think we were both excited to have a break from what we usually do, and to be forced to take ownership of making images that were ours, but also not entirely so. What I mean by ours, but not entirely so, is that it was important to us that we sort of meet each other in the middle—at least at some point—so that images didn’t feel too frenetic or disjointed. So how can one be true to themselves, but also to the project as a whole?

Gregory Halpern: I also liked that collaboration would just naturally allow us take creative chances. I think the fact that the work is less directly tied to your own ego is helpful, and freeing.

GJ: Can you elaborate more on the collaborative aspect of this work? What new challenges and opportunities rose out of this collaboration? Was the final selection and sequence of the work a fluid process?

AP: We do often joke that we had a very un-collaborative collaboration process. We shot separately, often in entirely different locations. Primarily the collaboration came through editing and sequencing the images, and surprisingly, it was easier to work together on this than we expected.

GJ: The work was published in a limited edition by Etudes Books in October, 2014. Can you talk about the thought processes involved when transitioning photographs from the book form into an exhibition? Is it important that the sequence and narrative of the work remains intact?

AP: I think this question is entirely contingent on the nature of the work. For us, because our book has no over-arching narrative so to speak, that wasn’t really an issue. Given the layout of the Passageway Gallery, we were more concerned with creating distinct but coherent atmospheres. How could each room/gallery be its own thing, but still work together as a show? Because CEPA is such a lovely and a large space we felt we would be remiss if we didn’t take advantage and be a bit more experimental in presentations than we could be in the linear, more straightforward nature of our book.

GH: The sequence or narrative doesn’t have to stay in tact, because each new venue provides an opportunity to think about and show the work differently.

GJ: In your statement for this project, you stated that you were thinking of the look and feel of time throughout the making of the images. And although photographs are static, that sentiment really resonates through the use of motion blur, and of subject matter that represents different states of stasis and temporality.

I think this motif even extends to the range styles of images as well, some deliberately composed and formalized, and others seemingly shot as improvisational snapshots made within the flow of time. I feel that similar lines can be drawn with other motifs within the work, such as light, birth and death.

How did each of you negotiate the relationship between the metaphors within the book and the styles of photographs used to represent those metaphors, apart from the subject matter? Was this a consideration during the process of shooting, or did it come later while the book was sequenced, or at all?

GH: Yeah these ideas were definitely a consideration, and inspiration in some ways, for making the work. For me, it was a chance to be more poetic or existential than I might normally be in my work.

GJ: This work represents a synthesis of two perspectives, visions, and approaches to the world through the photographic medium. I can’t help but draw distinctions to the marriage of these images and your real life marriage. Following on the popular notion that every photograph can be said to be a self-portrait to some extent, have each of you considered the ways that the work may reflect your own relationship to each other?

AP: I really like this question, and I’m sure a parallel close reading of the book and our marriage could come back with similarities, but to be honest, I don’t think we intentionally sought to have overlap between the two trajectories.

GH: It’s funny—the “tension” or differences in people can be both what makes a relationship work and be challenging. I guess the same could be said for images—just the right amount of tension, without tipping into chaos, is a nice balance to achieve. For us, the stylistic tension between our images was really interesting, and sort of enhanced each others’ work in this instance. I love the idea that there could be one photographer who would employ such a range, as if we created a third person with this work.

GJ: Lastly, what’s coming up for each of you over the next year?

AP: I have a book of photographs, A Spectacle and Nothing Strange, coming out with Kehrer Verlag next Fall. The book spans about 10 years of my work. I’m also currently working on a project loosely tied to the themes of Death and Motherhood.

GH: I’m working on a book of photographs made in and around Los Angeles. Last year I got a grant from the Guggenheim Foundation, so we took the year off from teaching and moved to Los Angeles for the year. I’ve been photographing in California on and off for ten years, and I wanted to be out there for an extended period of time, to photograph a lot and turn those ideas into something. I’m aiming to have the book out next Fall.

Gregory (b.1986) is a photo-artist and web publisher who grew up in Syracuse, and is currently based out of Rochester, NY. He received his B.F.A. in 2010 from Rochester Institute of Technology, and is currently pursuing his M.F.A. at Visual Studies Workshop. Greg’s writing and images are focused on the use of the digital medium to explore theories of visual language, constructed imagery, and classical photographic subject matter.